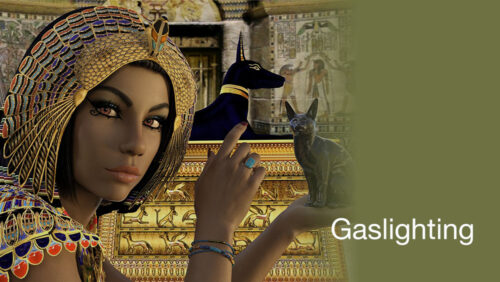 Gaslighting is a form of psychological manipulation in which a person seeks to sow seeds of doubt in a targeted individual or in members of a targeted group, making them question their own memory, perception, and sanity.

So many people ask me what Gaslighting is. I recently tweeted back to the person who asked, “I told you that in a previous tweet”. Then I said, “That’s Gaslighting.”

Gaslighting is manipulation and twisting of the truth. In the movie “Gaslight” filmed in 1944, the husband is deliberately manipulating his wife by making her think she is going crazy. She thinks she’s losing her mind. This type of abuse is very sneaky and covert. And it is done on purpose with “intent”. It was actually a really creepy movie for me to try and watch. (I had to turn it off because it triggered me so much.)

Someone who “gaslights” makes you question your reality. People who gaslight can lie quite easily. They have no guilt or remorse about their lying. Many cult leaders, dictators or narcissists use this tactic. It is a mind-control technique. Even if you have proof (an email or video), and challenge someone who “gaslights”, they will deny it. And they will be very crafty when they do.

“Gaslighters” know that if you are told something over and over, you may end up believing it. You must know who you are and be strong with boundaries.

My advice to you is, the first step is knowing what is happening. Be aware. The second step, write down all the things you know about yourself. Is the “gaslighter” telling you that you are a liar? If you know that you are not, they are using “projection”. Another manipulative tactic. But you must know who you are.

A gaslighter may use a “smear campaign” on you. What is this? They will tell others lies about you. They will twist some kind of truth and use it against you.

A gaslighter is smart. They play with people and people’s minds like they are puppets. If you have been a victim of a gaslighter, it is pretty horrible. I completely understand this type of manipulation.

I also believe having a good therapist helps! Someone who understands this type of psychological abuse.

This is a personal choice. One that each person has to decide what to do.

I believe that gaslighters are toxic people. They are psychological abusers.

Hey, we all make mistakes. And, we say sorry. I believe gaslighters lack empathy. They do not feel guilty about the harm they cause. They will blame everyone but themselves.

Watch my light-hearted video with my puppet Kermit. My puppets love telling my stories. And subscribe. It’s free.

***Please be aware that this is my puppet – but someone mentioned even Kermit triggered them.***