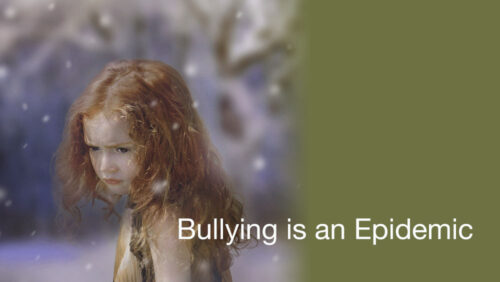 Could she run away? No! If she ran away, she’d have to say why. She’d have to tell. She had moved so many times, she had no family around that she could confide in. She had no friends. She felt completely – and utterly – alone. She was trapped.

We can no longer ignore bullying. Period.

When Dr. Wolke agreed to talk to me about his studies from the University of Warwick, I was thrilled. He has a copy of My Courage to Tell which resonates with the studies he has done on peer bullying and sibling bullying.

According to the stats, Canada has ⅔ more bullying than other OECD countries*. We are concerned about bullying as 78% of us feel not enough is being done. I have not had much support from my fellow Canadians. Perhaps it is either because we are in deep denial we have a problem, or we just don’t put any emphasis on bullying.

But, studies are starting to be done in the UK. Sibling bullying is starting to get some attention. Thank God.

Why is it so important?

Sibling bullying doubles the risk of self-harm, attempted suicide as well as depression. And if you are a victim of sibling bullying and are bullied at school, it doubles again. You are 3-4x likely to have these poor mental health outcomes. Why? You have no escape and are trapped.

Some definitions I have learned were very interesting. The “Pure Bully” is the individual who hurts someone else verbally, relationally or physically, and never becomes a victim. A “Victim” is the person who does not fight back or victimize someone else. And the “Bully Victim” is someone who gets victimized but fights back. The findings show the Bully Victim is very unsuccessful. Unfortunately, they don’t fare so well. The mental health outcomes are worse for them. They have tried to fight back – but failed.

One’s dignity may be assaulted, vandalized and cruelly mocked, but it can never be taken away unless it is surrendered.

Bullying is considered so normal that it is completely ignored and according to Dr. Wolke, the psychological effects are long-lasting.

In peer bullying, pure bully children are seen as the “cool kids”. They are the kids others want to be seen with. They get resources and people want to be around them. They are callous. They don’t see the pain they cause others and get rewarded. They may become the bankers of the future, the CEOs, or run countries. They exclude people and call them names. They put others down. And they get rewarded. We reward the “Pure Bully”! I am not sure why we continue to reward abusive behaviour in our society. But we do. And it begins early in childhood.

In sibling bullying, a bully at home is 3x more likely to bully at school. The bully is learning how to bully at home. They learn certain behaviours that they can get away with, with their sibling. They try the same bullying techniques with their peers. For most of you reading this, I’m sure it rings true.

A victim at home is twice as likely to become a victim at school. And a victim of sibling and peer bullying is trapped. There is no escape. It is concerning for a child if they are dealing with both types of bullying.

In our interview, Dr. Wolke talks about Cyberbullying; another recent study completed by the University. There were 2,800 children ages 11-16 who were selected for this study. What they found was Cyberbullying is important and has ill effects. They found 85%-95% of children who are cyber-bullied are also traditionally bullied. “Bullying is all about power,” Dr. Wolke said. “You don’t write to someone in China.” Almost all of Cyberbullying is directed at someone they know in school. There is a lot of hype about Cyberbullying, yet most of the time, it is an extension of what is going on at school. “It is just another tool,” Dr. Wolke says.

There is one difference in Cyberbullying. It is called “Revenge Bullying”. According to Dr. Wolke, you can try to get back at another person anonymously online.

Why do siblings bully?

The study shows that sibling bullying is evolutionary. It comes down to resources.

So why? Why has this subject been ignored? Why are we not helping families deal with sibling bullying? Why are we not looking deeper? With the concerning mental health outcomes, we can no longer ignore this important subject.

Dr. Wolke has given tips for parents in my interview. He talks about the mental health outcomes of sibling bullying and gives advice on how healthcare professionals can also help.

There is a problem. And I believe there is a solution. But without talking about it – we can’t resolve it.

1 thought on “Bullying is An Epidemic”