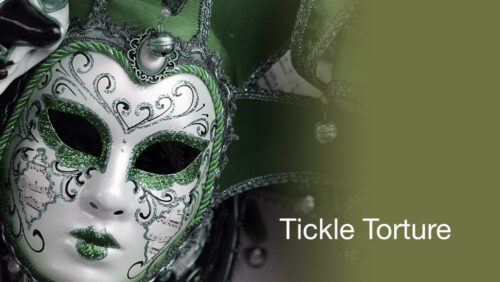 The Dark Side of Tickling

Before you read this post, I am going to tell you upfront – it may be triggering. This is a story about physical abuse and emotional abuse.

I was tickle tortured. Until I cried. When I tried to get my parents to listen, I was laughed at or ignored.

I have dealt with this problem before, but tickling is such a well-disguised form of torture that I feel it should be unmasked periodically. Tickling is NOT, and I repeat, NOT harmless fun. It is a subtle form of sadism.

What is the definition of tickle torture?

If a bigger, more powerful person uses tickling to force others into submission, this can be considered abusive. There are some individuals who might disagree, however, the truth remains it is a form of torture, here’s why: The Urban Dictionary’s definition of torture includes “to punish, coerce, or afford sadistic pleasure”. Tickling can easily turn into ‘sadistic’ pleasure: (“To derive pleasure or enjoyment from another’s pain. Whether physical or emotional”).

Tickling sets in motion reflexes that cause the body to jerk, lunge, and causes weakness so that the individual cannot defend themselves. In some instances people have lost bladder or bowel function in public, causing embarrassment. In ancient times some groups of Chinese and Middle Eastern cultures used tickling as a form of torture against prisoners.

While tickling can be fun and pleasurable at times, prolonged tickling becomes annoying and turns painful. When a parent uses tickling to dominate or even frighten their children, this sadistic form of torture is abusive.1

In the New York Times article Anatomy of a Tickle Is Serious Business at the Research Lab, Richard Alexander,  a biologist said,  “Ticklish laughter is not the happy phenomenon that many have assumed it to be…A child can be transformed from laughter into tears by going the tiniest bit too far… [Tickling] does not create a pleasurable feeling—just the outward appearance of one.”

My ears perked up when I read this in the article posted in the Huffington Post.

What is the background of tickling? It is called “torture” for a reason.

Tickling was used by the Chinese in the Han Dynasty. They used this “torture” because it caused suffering and left NO MARKS!

Ancient Rome used this “torture”. They would soak a person’s feet in salt. Then the goats would lick their feet. People could not get away — they were tied up.

A Nazi prisoner wrote of a terrible account having this “torture” used on him with a feather.

Tickling has a dark side!

A recent article in the Huffington Post stated, “I’d be remiss if I failed to mention that tickling is one of the means used by sexual predators to groom their victims.”

Stop means stop. No means no. Please know — there is a dark side to tickling. And it can be disguised by a bully. Mine was.

Here are the guidelines:

Jennifer Lehr wrote in her article on tickling:

Am I saying never tickle your kids? No! I know some kids love it. I think we can tickle responsibly. Here are my guidelines: